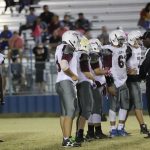 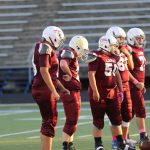 The Lamar 8th grade football teams traveled to Wildcat Stadium on Tuesday night to take on their rivals from Travis Middle School.. The Bearcats went 1-1 in their evening matchup with the Mustangs. The “A” team defeated Travis by a score of 18-0.  Notable players for the Bearcats included: Lezlie Jackson, Khiari Carter, O’Ryan Peoples, Bryson Drummond, DeMontrae Wheelock, Daniel Fuentes and Jayson Jenkins. Lamar

The Lamar 8th grade football teams hosted Copperas Cove Junior High in their season opener on Tuesday night at Woodson Field. The Bearcats started the season strong with a pair of victories over the Bulldawgs. The “A” team defeated Copperas Cove by a score of 33-8. Copperas Cove scored on their first possession of the night but the

With football starting on September 8th, the Lamar boys athletics department would like to announce some important information and dates. Physicals must be completed prior to being able to participate. Equipment pick-up September 5th 8th Grade 9:00am to 10:30 7th Grade 11:00 to 12:30 Practices begin on September 8 8th Grade Practice 6:45 am –

The 2020-21 Cen-Tex Middle School district will have a different look this upcoming season with the addition of several schools. The district has expanded to 16 schools and will be divided into two divisions. Joining the current schools will be Belton M.S. (Belton ISD), Cesar Chavez M.S., G.W. Carver M.S., Indian Springs M.S., Tennyson M.S. 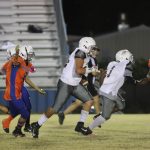 The Lamar 8th grade football teams closed out their season on Tuesday with a pair of victories over Bonham at Woodson Field. The “A” team defeated Bonham by a score of 34-12. Notable players for the Bearcats were :Devn Jackson, Michael Bachicha, DeMariyae Evans, Jovonnie Robledo, Jose Torres Jervonnie Williams, Rene Medina and Roman Rios. The “B” team defeated Bonham by 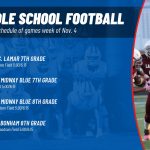