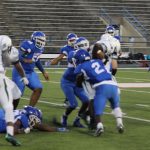 The Wildcats junior varsity and freshman football teams were in action Thursday night. While the Blue teams each faced Bryan Rudder while the White teams played non-district contest with La Vega and Cameron. Here is a recap of some of the games. JV Blue Junior Varsity Blue defeated Bryan Rudder at Wildcat Stadium by a 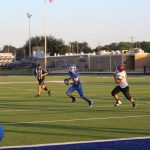 The Temple junior varsity and freshman football teams were in action this past Thursday with various games with multiple teams. Temple had a good showing by going 4-0 against their opponents. Here are the results from Thursday’s action. Junior Varsity Blue The Junior Varsity Blue team defeated A&M Consolidated 13-7 to improve their district record 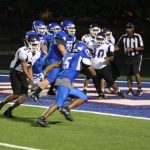 The Temple junior varsity blue football team opened district 18-5A play on Thursday night with a 51-14 victory over University at Wildcat Stadium. The Wildcats got 3 touchdown runs from Josh Murrell and Kyleland Sauls to lead the offense. Murrell scored on a pair of 1 yard touchdown runs to go along with a 25 yard 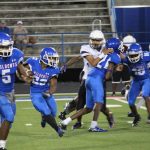 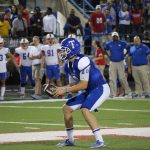 Even with seven decades having gone by, it may be more amazing now than ever that the doodling on a drug-store napkin would still hold up as one of the most iconic designs in Texas high school football and a rallying point for the Temple Wildcats faithful. The story of the origin of Temple’s blue-front, 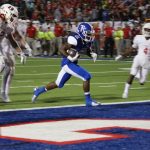 Juice is a popular beverage in the morning, whether it’s orange, apple, cranberry, grapefruit or another kind. But it was late last Friday night when Temple found itself in serious need of fresh juice, trailing Belton in the third quarter of the teams’ season-opening rivalry showdown at filled-to-the-brim Wildcat Stadium. Fittingly, the Wildcats called upon 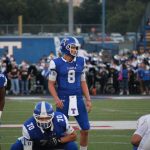 Considering that Temple compiled 485 yards total offense and never punted, it’s hard to believe that the Wildcats had to claw back from a 14-point, third-quarter deficit to overtake rival Belton for a 38-31 win in last Friday night’s season-opening showdown at overflowing Wildcat Stadium. Then again, considering that Temple threw three interceptions, lost a

Clips brought to you by Rapid Replay Download the mobile app today! 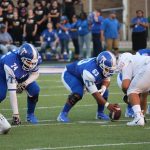 The Temple Wildcats will travel to Round Rock on Friday to take on the Round Rock Dragons. Here is some parking information prior to your arrival. Central Baptist Church in Round Rock is once again making our parking facilities available to football fans utilizing the visitor’s seating of the RRISD Dragon Stadium. We are located