The Tem-Cat volleyball team closed out the Bev Ball Classic in Abilene with a pair of games on Saturday. Temple was defeated by Lubbock High 25-6, 25-14 in the first game of the day and later fell to San Angelo Lake View 25-16, 25-19. In the Tem-Cats game with Lubbock High, Jenna Green recorded 4

The Tem-Cat Volleyball dropped four matches in Abilene on Friday but showed signs of improvement at the Bev Ball Classic played at Abilene High School. Temple fell to Graham 26-24, 25-10 in in their first match as Jenna Green led the Tem-Cats with 4 kills while Jule Hendy recorded seven assist. Destinee Byars picked up a pair of

Temple Head Football Coach Mike Spradlin made an appearance on ESPN Central Texas to talk about Wildcat Football. Craig Smoak interviews Coach Spradlin and covers the outlook for the 2014 season and Temple’s move to the new District 17-5A. Check out the link to the ESPN 1660 podcast and here more about the 2014 Wildcats! 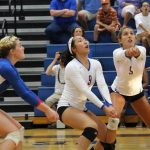 Tem-Cat Volleyball opened the season on Tuesday night with former district opponent Belton at Wildcat Gym. It was the first game for new head coach Courtney Mitchell a former Tem-Cat volleyball player herself. Temple however, dropped their opener in three sets by a score of 25-13, 25-6, 25-18. Leaders for the Tem-Cats were Darby Voight

The 2014 Football season begins on Monday August 11th as players report for practice. All JV and Varsity players are to report to the fieldhouse by 6:15 am and practice will begin at 7:00am. The varsity squad will return at 1:30 for film and weights. Freshman football players are to report by 9:00 am and

The 2014 Volleyball season begins on Monday August 4th as players report for practice. All incoming freshman, JV and varsity players are to report to the Gym Foyer by 8:00 am. Prior to workouts, all players must have turned in required TISD and UIL participation paperwork in order to practice. Incoming 9th and 11th graders 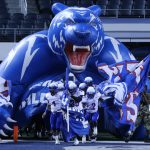 Multiple Teams · Jul 14 Welcome To The Home For Wildcat Sports

Fall sports are around the corner and this year the Wildcats will feature an online presence that will cover our schools athletic programs like never before. Stay tuned for more details and exciting news!

Stay tuned for schedules to be posted on the website for all Fall sports.

Scrimmage
10:00 am
View All Events