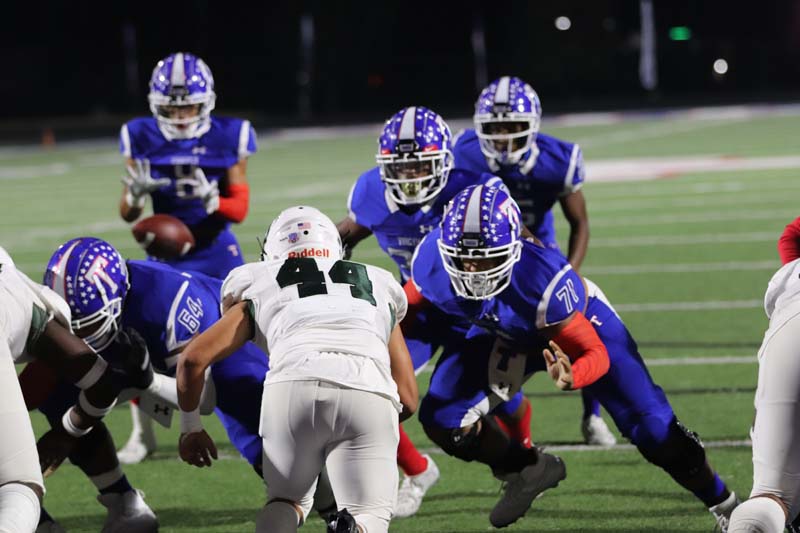 KILLEEN – Instead of watching Killeen Shoemaker play Harker Heights last Friday night at Leo Buckley Stadium, Temple head coach Scott Stewart much rather would have been coaching the Wildcats against rival Belton at Wildcat Stadium.

However, last Tuesday afternoon Belton determined that because of COVID-19 cases and related quarantines, the Tigers could not safely field a varsity team for the second consecutive week (their game against Heights was rescheduled) and would not travel to Temple for Friday’s scheduled clash.

That left the District 12-6A-leading Wildcats (7-1 overall, 5-0 in 12-6A) with a forfeit win and an unexpected open date on their schedule leading into tonight’s high-stakes showdown with the speedy Grey Wolves of second-place Shoemaker (6-1, 4-1) at 7 at Buckley, where Temple can clinch the outright district championship.

Although it officially went down as Temple’s eighth straight victory over Belton in a 10-season span, the Wildcats – who already have wrapped up their eighth consecutive playoff berth and will compete in the Class 6A Division II bracket – definitely were bothered by not getting to compete in the highly anticipated rivalry duel.

“It was a bummer,” sophomore receiver Mikal Harrison-Pilot said. “We were all excited to play.”

Because Belton and Harker Heights now plan to make up their game in the regular season’s final week, there is no available date for the Temple-Belton game to be rescheduled.

Stewart certainly understood his players’ frustration but knew that all parties involved – Temple, Belton and district’s other six schools – had to adhere to the policies agreed upon last Tuesday by 12-6A’s District Executive Committee.

“Our kids were frustrated. They wanted to play that game. They look forward to that game,” Stewart said. “They just want to play. They asked, ‘Why?’ and that’s a question I can’t answer. That’s not my decision to make. But the counterpoint to that is as a district we had to look at all teams and not just what teams were affected at that moment. You can read and I can read that the (COVID-19) numbers are going up by the day.

Click here to read the entire article on TempleBeltonSports.com by Greg Wille