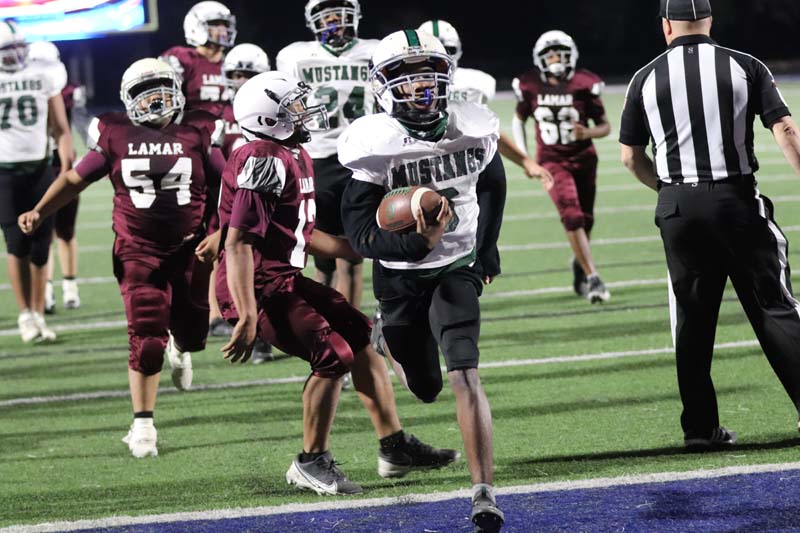 The Travis A team was also victorious last night over the Bearcats to the tune of 32-20. With the win the Mustangs also claimed a district championship. After suffering a loss to the Bearcats during the 2nd game of the year, the Mustangs battled all night in a cross-town showdown with its rival, the Lamar Bearcats. The Mustangs were led offensively by Anthony Ramos 2 TD runs, Ronquavion Gates 1 TD run, Dominic Gotay’s 1 TD reception from QB Kade Stewart. Diego Guiterrez was perfect in his 2-point conversion kicks going 4-4. The Mustangs defensively were led by Scott McPherson’s 1 interception and 1 fumble recovery. Other Mustangs who led the charge on the defensive side of the ball were Jacorian Valdez Peoples, Sabias Hill, Ramos, and Gates. The Mustangs who went 4-5 last year finished the season 7-1 and the 2020 Central Texas District Champs.

Coach Hoelscher, “I couldn’t be prouder of both groups and the number of obstacles we had to overcome this year. Bringing in a brand-new coaching staff the kids believed in what was taught.  It wasn’t always easy, but they were resilient and gave everything they had. I told our boys I’ve never been around a group that just loved being around each other. As coaches we absolutely love our boys. Hats off to Lamar, the future in Temple, Texas is extremely bright.