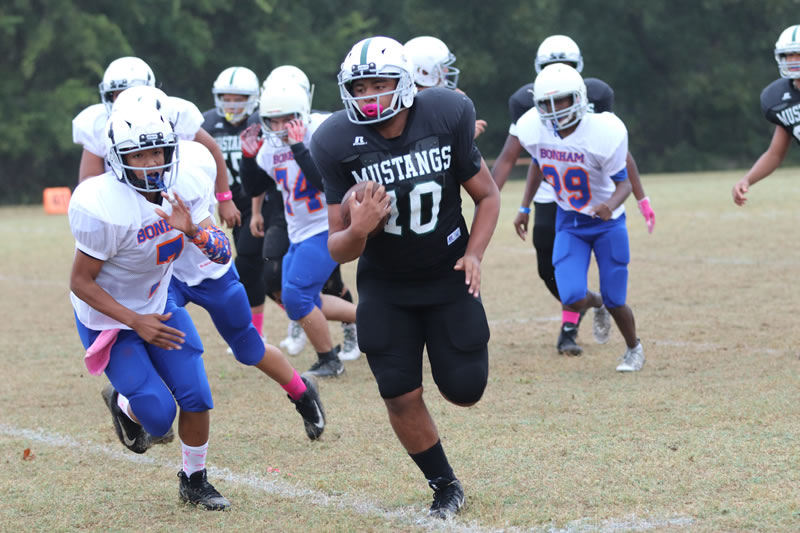 The Travis Science Academy 8th grade football teams had a last minute change of venue in their contest with Bonham on Tuesday, but with the game being moved to Bonham’s home field the Mustangs felt quite at home as they defeated Bonham in both contest.

The “A” team defeated Bonham by s score of 47-0. Tavion Flowers got the scoring for the Mustangs with a interception returned 24 yards to put Travis up 7-0 in the first quarter.

The second quarter saw Travis put some distance between themselves and the Bulldogs with a pair of rushing touchdowns to get things going. The first from Manajh Peoples from 31 yards and Bryce President from 28 yards. Manajh Peoples second score of the quarter came on an interception returned 72 yards for the Mustang score and Aiden Brown then extended the Travis lead to 26-0 on a short 2-yard touchdown.

Tavion Flowers capped off the scoring for Travis in the fourth quarter on a 14 yard TD pass reception from Bryce President.

Travis improved to 7-0 on the season.

The “B” team defeated Bonham by a score of 37-0. Travis scored 18 first quarter points to jump out early on the Bulldogs. The first score was a rushing touchdown from Michael Lopez and the two other scores were fumble recoveries returned for touchdowns. The first from Mikey Nguyen and the second from Jesus Hernandez. Michael Lopez’s 15 yard rushing touchdown in the second quarter extended the Mustang lead to 25-0 at halftime.

Travis improved to 6-1 on the season.

Travis will close out the season next Tuesday at Woodson Field when the host Midway Blue beginning at 5:00.