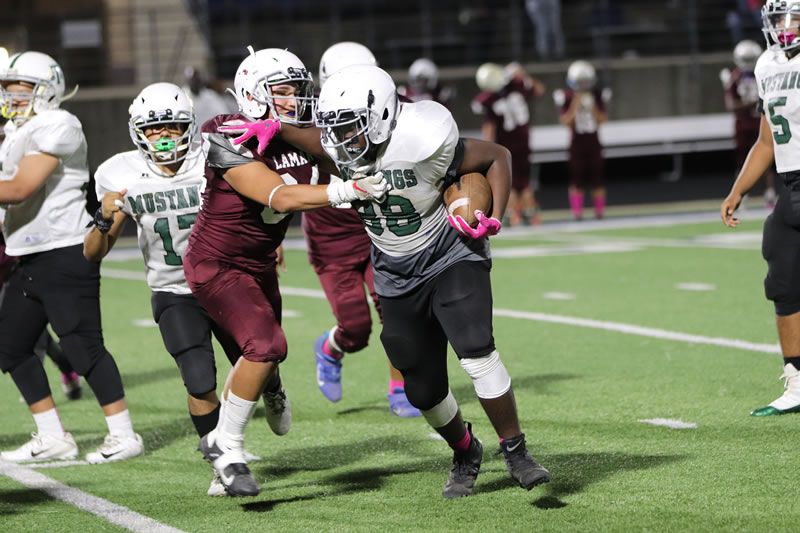 The Travis 8th grade football team played the Lamar Bearcats on Tuesday evening at Wildcat Stadium and the results were positive for the Mustangs as they won both games against the Bearcats.

The “A” team defeated Lamar by a score of 46-14. Lamar took an early 6-0 lead on Travis before the Mustangs answered with A Benjamin Blidee 82 yard touchdown run on a reverse to give the Mustangs a 7-6 lead. Travis tacked on three touchdowns in the second quarter with Bryce President rushing for two and also throwing 24 yard touchdown pass to Froylan Jarimillo for the other. This gave Travis a 26-6 lead going into halftime.

President threw his second touchdown on the night in the third quarter as he connected with Tavion Flowers from 30 yards out and then Manajh Peoples returned an interception 84 yards to extended the Mustang lead to 39-14 after three quarters of play. President picked up his third rushing touchdown of the night in the fourth to give the Mustangs the final margin of victory, 46-14.

Besides the People interception returned for a TD, the Mustangs also intercepted two more Bearcat passes with Bryce Pleasant intercepting one in the first half and Tavion Flowers one in the second half.

Travis improved to 6-0 on the season.

The “B” team defeated Lamar by a score of 13-0. Michael Lopez gave Travis an early 6-0 lead in the first quarter until Parker Madsen capped the Mustang with with a 76 yard touchdown run with three minutes left in the contest.

Travis improved to 5-1 on the season.

Travis will play Bonham next Tuesday at Wildcat Stadium beginning at 5:00.